No one can miss the great square keep of Rochester Castle as it towers above the River Medway. It was on this site that the Romans originally built the first fort to guard the bridge that connected the London to Dover route.

The castle was partly demolished in 1215 at the hands of King John, who famously attacked it burning the pit props using the fat of 40 pigs, to recapture it from the rebel noblemen. The rebuilt circular tower, contrasts with the three remaining square ones as a reminder of one of the bloodiest sieges in history.

Further along the banks of the River Medway, Upnor Castle was built to protect Queen Elizabeth I’s warships moored at Chatham.

Despite a brave attempt, the fort proved ineffective in 1667, when the Dutch sailed up the river to attack the British fleet at anchor. An audiovisual experience relives this dramatic raid in detail at the castle.

As a result of the Dutch raid, the first fort near Gillingham was built. Cookham Wood Fort was begun in 1669 to hold guns on two tiers that would fire at hostile vessels entering at Gillingham Reach.

Fort Amherst was built in 1756 to defend the naval dockyard from landward attack. The fort has a fascinating and thrilling complex of underground tunnels, chambers that were extended in the early 19th century by French prisoners of war to create a vast underground stores, guardrooms and barracks. Guided tours of the tunnels are available throughout the year.

As you explore Medway in more detail, you will discover many other forts dotted along the rivers edge. These include Fort Slough a small artillery fort built in 1867 in Allhallows-on-Sea, Fort Luton in Chatham, Fort Hoo and Fort Darnet all with their own interesting stories to tell.

Things to See & Do 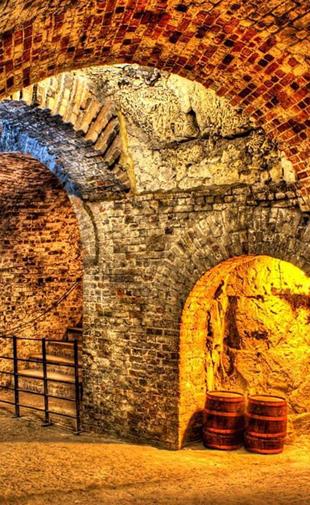